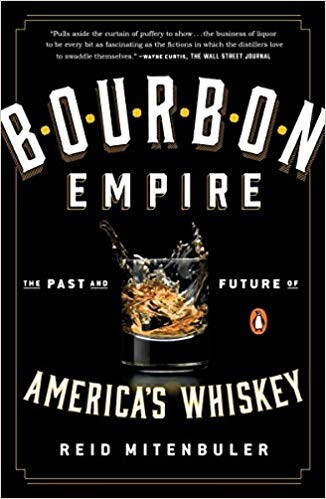 Walk into a well-stocked liquor store and you’ll see countless whiskey brands, each boasting an inspiring story of independence and heritage. And yet, more than 95% of the nation’s whiskey comes from a small handful of giant companies with links to organized crime, political controversy, and a colorful history that is far different than what appears on modern labels. In Bourbon Empire, Reid Mitenbuler shows how bourbon, America’s most iconic style of whiskey, and the industry surrounding it, really came to be—a saga of shrewd capitalism as well as dedicated craftsmanship.

Mitenbuler traces the big names—Jim Beam, Maker’s Mark, Evan Williams, and more—back to their origins, exploring bourbon’s founding myths and great successes against the backdrop of America’s economic history. Illusion is separated from reality in a tale reaching back to the Whiskey Rebellion of 1794, when the ideologies of Thomas Jefferson and Alexander Hamilton battled to define the soul of American business. That debate continues today, punctuated along the way by Prohibition-era bootleggers, the liquor-fueled origins of NASCAR, intense consolidation driven by savvy lobbying, and a Madison Avenue plot to release five thousand parrots—trained to screech the name of a popular brand—into the nation’s bars.

Today, the whiskey business takes a new turn as a nascent craft distilling movement offers the potential to revolutionize the industry once again. But, as Mitenbuler shows, many take advantage of this excitement while employing questionable business practices, either by masquerading whiskey made elsewhere as their own or by shortcutting the proven production standards that made many historic brands great to begin with.

A tale of innovation, success, downfall, and resurrection, Bourbon Empire is an exploration of the spirit in all its unique forms, creating an indelible portrait of both American whiskey and the people who make it.